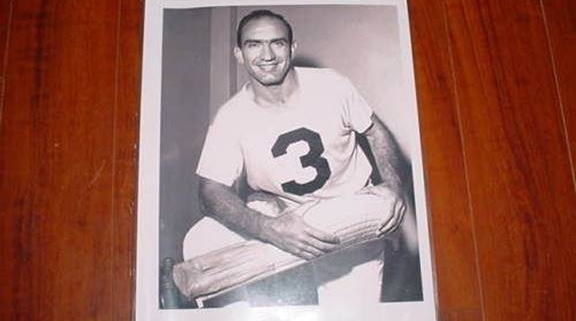 Churruca, one of the top players to ever play the game.

Having survived my first season at Tampa Jai-Alai, I was now unemployed.  Even though I was the public relations director, a department head, I was still just a seasonal employee.  Ocala Jai-Alai was under construction with a target date to open in the summer of 1973.  The plan was, the Tampa employees and players could work at the Ocala Fronton after Tampa closed, thus giving them about 9 months employment for the year.  But that was next year.

My close friend and amateur Jai-Alai playing buddy, Neil Einhorn was still at UF. He convinced me that the summer of ’72 was a perfect opportunity for us to backpack through Europe.  We could spend some time in the Basque country, visit some of the players we now knew, and further my ongoing education into the sport.

First, Neil suggested riding motorcycles throughout Europe.  That sounds so adventurous, riding through the Swiss Alps on your rented Harley.  Then, my brother mentioned that it rains during the summer.  Plus, those seats get hard on a bike after a few hours.  Fortunately, we came to our senses and decided to rent a car instead.  There were many good long-term rental car deals for students back in 1972.  We rented a small French car, with unlimited mileage, for two months, to be picked up in Paris.

So, we filled our backpacks with a few pairs of shorts, t-shirts, underwear, and socks. Our sleeping bags were rolled up and strapped to the top.  We flew one of those budget airlines, Air Florida (went bankrupt a few years later) from Miami to London.  After sleeping in a tent camp for 60 pence a night ($.75) in London a few days, we made our way to Dover and across the English Channel, eventually getting to Paris.

We ended up missing our appointment at the car dealership due to me misreading the map.  I took us on the Metro to the outskirts of Paris about 25 miles the opposite direction of the car dealer.  By the time we got back, the dealership had closed, and we had to now wait until Monday to get our car.  Not a good start to the trip.

Finally, having rented our car, we set out for St. Jean-de-Luz in the French Basque area about 8 hours south.  Remember, there were no cell phones, no internet, no GPS.  We actually had old fashioned maps.  Plus, the road signs are completely different in Europe.  I was doing all the driving.  Neil was doing all the sleeping.

From the moment we got into our car, Neil would press the recline lever on the side of his seat and lay down flat. The only thing he could see was the inside dome light of the car.  This didn’t bother me until we got into some of the picturesque areas of our trip and I would yell “look out the fu…ng window!”  Spending two or three months with anyone can be a trying experience.  I was now beginning to wonder whether we would even make it to Spain before we killed each other.

One of my favorite players on the Tampa roster was “The Flying Frenchman”, #39 Jasa.  He spoke good English, had a beautiful Parisian wife, Helena, and was a fan favorite in Tampa.  He was from the small French village of Bidart, just north of St. Jean-de-Luz.  I had told Jasa toward the end of the season that we were planning a trip to Europe and might be in his area.  He generously offered accommodations if we passed his way.  Once we got to Bidart, we stopped at the local Café and asked if they knew Jean Claude Jasa.  They promptly got word to him that two Americans were asking for him and they showed up within 15 minutes.

Jasa and Helena gave us some big French hugs.  We told them about the early part of our trip and how we were looking forward to seeing the Basque country.   Jasa told us to follow him to a campground named Rousseau, just on the outskirts of town, where he had arranged for us to stay in a small trailer.  We were thrilled since this was far better than the tent in London.

Jasa was the perfect host.  He showed us around, introduced us to his friends, and even arranged for us to see a game of Chistera (the French version of Jai-Alai played outside against a single wall.)  The next morning, he took us to the Chistera court and let us play.  What a great experience, playing this ancient French game in a tiny French Basque village.

Jasa and Helena had to go to Paris for the rest of the week but said we could stay in the trailer as long as we were in town.  We wanted to see some of the partidos down the road at the St. Jean-de-Luz fronton, so we said we would be staying for just a few more days.  We thanked them, said our au revoirs, and told them we would see them back in Tampa in December.

I wanted to show Neil some of St. Jean-de-Luz, since I had just visited there last year during the World Amateur Championships.  So, we headed to the beach area near the casino.  As we walked along the beautiful promenade overlooking the beach, we saw two very attractive girls walking near us.  We heard them speaking English and quickly asked, “Are you American?” which was the only pick-up line we knew.

Apparently, they had been in Southern France for a while, desperately homesick.  Hearing us speaking English overcame any fears they had of our scraggly appearance. They both smiled and said they were from Ohio and so glad to see some Americans (probably no matter how they looked).  After walking a while, we invited them back to our trailer for some “wine” or whatever they might have had with them at the time (my memory is a little blurred on that.)  They quickly accepted and no doubt our imaginations of what might come next began to run wild.

But there was one major problem.  Four of the best Jai-Alai players in the world were playing a big match that night.  Ondarres and Goyogana were facing Guisasola and Churruca.  These players no longer played in the United States but were rated as the top players in the world.  Neil and I had tickets to see that match.  Neil and I, also, had two beautiful girls in our trailer at Camp Rousseau giving us every indication that if we played our cards right, they would still be in our trailer until tomorrow morning.  They were leaving the next day for Northern France, so this was their last night here.  Could there be any better scenario for us?

Now, only true Jai-Alai aficionados (or Jai-Alai nuts) can appreciate this dilemma.  Jai-Alai or sex?  What would we choose?  You will find out in Part 2.